Oh, Steve Harvey. I feel for you.

It should have been a shining moment, announcing the Miss Universe 2015 winner. It was supposed to be magical– for both yourself and the ladies on stage – but instead Miss Colombia and Miss Philippines have been left to deal with your flub, while you have become a laughing stock / most hated man on TV this week.

(I say this week, because someone else is bound to do something that steals away the limelight in a matter of days.)

In case you have no idea what I’m talking about, TV game show host Steve Harvey hosted the Miss Universe pageant this week and mistakenly crowned Miss Colombia the winner, when in fact she was the runner up. On live TV.

After the music played, the glitter fell from the ceiling and Miss Colombia was given her crown while crying tears of joy, Steve had to slink back on stage for a “sorry, just kidding, I made a mistake” moment.

Miss Colombia was in fact the first runner-up, and Miss Philippines was the winner. Steve read the card wrong. HASHTAG AWKWARD.

Everyone’s giving poor old Steve a hard time. On one hand, I understand why. He is a professional host and entertainer, probably being paid a pretty penny to host the biggest beauty pageant in the world, and mistakes like this just don’t fly on live TV.

But on the other hand, mistakes do happen. Live TV is a stressful business. It’s the reason why the pay packets tend to be big for the professionals, and it’s also why in the world of PR we dedicate a good chunk of time media training our clients on how to handle themselves in front of the camera. It’s not easy, and even consummate professionals are prone to screw ups.

One of the most important things we tell our clients about live TV interviews is that if you make a mistake, you can recover. No, you can’t take back whatever was said or done – but you can learn how to conduct yourself and your response to the mistake in such a way that people forgive you, and maybe even forget it altogether.

People are being hard on Steve, but I actually think his recovery was pretty good. Look, it was a crap situation, and he didn’t have a choice – he HAD to right the wrong he’d made. Numerous commenters online have suggested Steve and the Miss Universe panel should have just let the mistake run (“no one would know!”), but there’s no covering up a mistake like that. It would have taken no time at all for the truth to be revealed, and then both Steve and the organisation would have had an even bigger PR crisis on their hands.

Steve came back on stage apologising, but not making excuses for his mistake, which was the right thing to do. As the crowd started booing, Steve addressed the audience and took full responsibility for the blunder, while simultaneously trying to give the girls their time in the limelight.

Both girls looked like deers in headlights (oh my god, it’s just so awkward when they take the crown off Miss Colombia’s head) but he did his best.

In fact, I reckon he did better in his recovery than a couple of other live TV blunders.

To their credit, the models are super nice about it. They handled it well – Sarah, not so much:

Regarding Steve, a few marketing and brand experts tend to agree he wasn’t solely at fault in his mistake. Many also believe he recovered well and, in fact, the design of the card he was reading from was at least partially to blame for the mess. I mean, it’s not a very well-designed winning card for a multi-million dollar, hugely-produced international beauty pageant, is it? How was the design of this pretty damn important piece of paper totally overlooked? 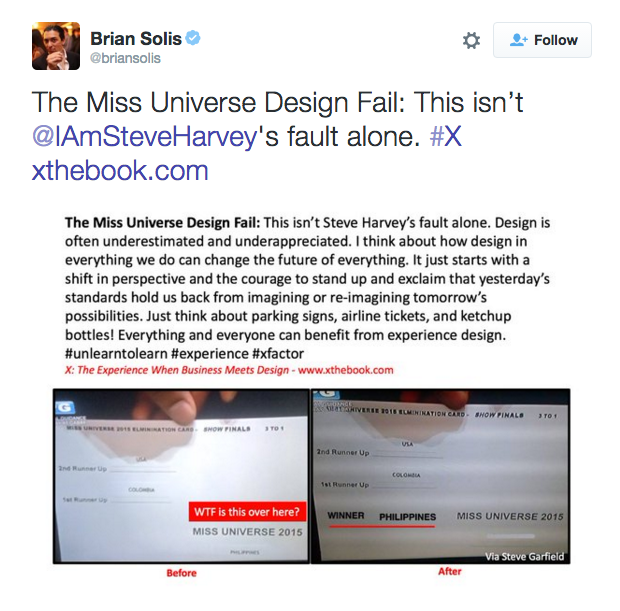 Want to learn more about speaking to media and conducting yourself during media interviews? Get in touch with us at [email protected]