Data is playing an increasingly larger role in helping brands stand out in a crowded digital marketing space. From insight reports on consumer behaviour, to survey results on a specific demographic, thought leadership increasingly relies on data to showcase the breadth and depth of a company’s capabilities, to send a message about their priorities, or to demonstrate their thinking.

But simply presenting data is not enough. To engage the intended audience, it has to be presented in a way that is clear, organised, and tailored. If you want to ensure your data-driven content marketing is clear and insightful – and not just a collection of numbers on a screen – here are five ways to convert complicated data into something more accessible:

Gathering data is just the first step. Without context, data is just numbers and facts. To be useful, it needs to be sorted, analysed and interpreted. It needs to tell a story, as this one viral meme illustrates: 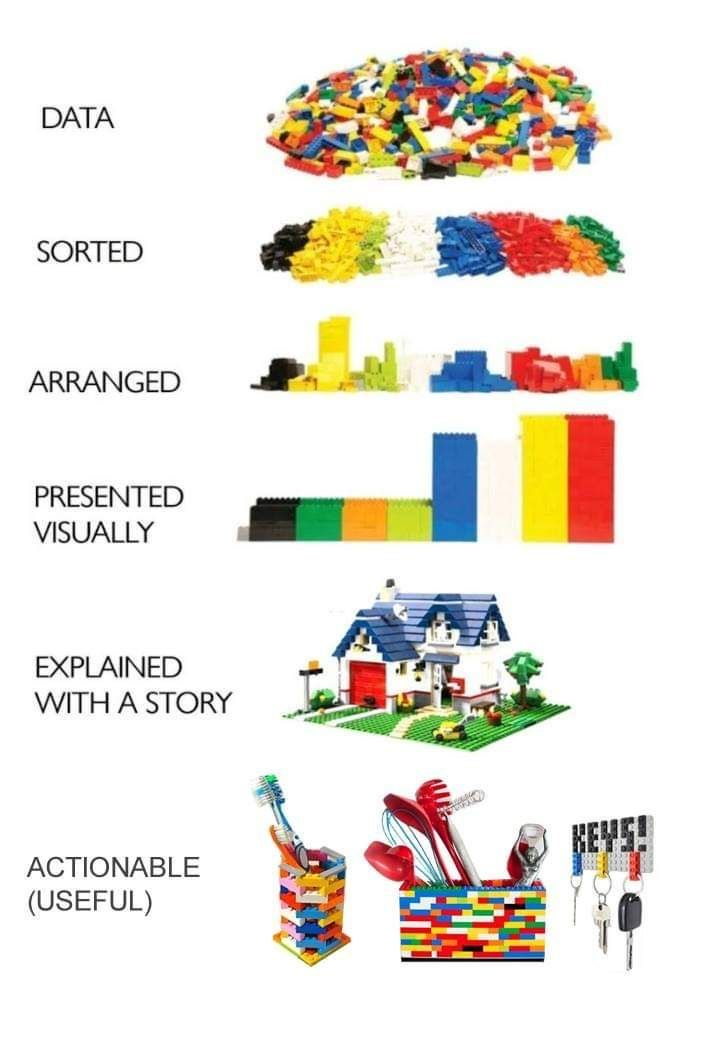 But what exactly does “telling a story” mean? The ingredients required to tell a story are usually the same. Be it a documentary, or a market research report, almost all stories are narratives about conflict between opposing forces. As you work through your data, ask yourself how your findings might fit into this basic structure which you may remember from school:

For example, an exposition can be about what the current industry landscape looks like. From there, you can discuss what parties or forces oppose one another and why, according to the data. (Rising action) What could happen when these opposing forces clash? (Climax)

As you structure your story, remember to answer the question, “So what? Why is this important? Why should my audience care?” Why does it matter that 9 in 10 people in the country have internet access through their mobile phone, for example? People won’t bother consuming content unless they understand why it’s relevant to them or the work they do.

Use clear and concise language

Your choice of words affects how your target audience receives your content. Unless you’re trying to reach a specialised audience, you should keep your words clear and concise so they’re easier to digest.

Avoid using complicated words when simple ones will do (e.g. “use” instead of “leverage”, “but” instead of “however”) or using a phrase when a single word will do (“now” instead of “at the present time”, “if” instead of “in the event of”). Split long sentences into shorter ones.

Be mindful of acronyms: Depending on your audience, not everyone will understand what EMEA (Europe, the Middle East and Africa), COB (Close of Business), CTR (Click-Through Rate) or CSR (Corporate Social Responsibility) refers to. If you can, spell them out at first instance or explain them.

Same goes for jargon – unless you’re speaking exclusively to marketers, try to avoid using terms like “customer journey”, “top of funnel”, or “conversion”, for example. If you must use jargon, use it sparingly.

Use analogies to clarify ideas

Comparing the similarities between two things can help to clarify or explain a point. Using analogies can be especially helpful for people who aren’t familiar with an industry or field, to help them understand an idea more clearly.

When it comes to long-form content such as op-eds, reports, or webinars, it’s not enough to mention your key message just once and hope your audience remembers. Repeat it twice, three times, or more in many different ways throughout your material. Don’t be afraid to sound repetitive. The same approach is often used in media interviews, when spokespeople repeat a message multiple times to drive a message home.

Do note there are scenarios where repetition may be counterproductive, especially for short-form content such as social media posts or digital ads.

People might not read your words, but they’ll look at the pretty pictures. Use visuals to make complex concepts easier to understand – like graphs, charts, pull-out statistics, and infographics. It all helps audiences visualise data and break the monotony of text.

When it comes to visual cues, headings and subheadings are a good (and sometimes under-utilised) opportunity to promote your message clearly. To be effective, headlines should be short (between 7 to 15 words, the shorter the better) and understandable even with zero context. Sharp headlines make key takeaways easier to remember.

Need help with putting together an engaging long-form data-driven report or white-paper? You’ve come to the right folks: [email protected]